How to Fix Botched Lower Eyelids

Why did your plastic surgeon take this approach? The simplest answer is that it is customary for them because they were trained this way.  It is what they were taught and the field persists in using this surgical approach because the alternative requires the surgeon to work very close to the eye.  Different surgical specialties offer eyelid surgery. Many eyelid surgeons who perform surgery are not trained to work close to the eye.  For that reason, they prefer to make their lower blepharoplasty through a skin incision.  In the opinion of Dr. Steinsapir, that is generally a bad choice because many of the most common complications (such as botched lower eyelids) after lower eyelid surgery could have been avoided by using the transconjunctival approach rather than a transcutaneous approach.

The issues that bring most to consider surgery include a lower eyelid bag or dark circles caused by orbital fat that becomes visible in the lower eyelid, lower eyelid wrinkles, crows feet lines, and often a prominent muscle roll right at the edge of the eyelid.  If you have had lower eyelid surgery and are reading this page because you had this type of eyelid surgery and now have a problem, it really does not matter why your eyelid surgeon chose this approach other than to understand they he or she thought they were making the right choice for you.  Only it wasn’t.  You are here reading this page because what you have been told so far doesn’t make sense.

Perhaps your relationship with your original eyelid surgeon has broken down.  In most cases, the plastic surgeon who created the problem with their well-meaning surgery lacks the necessary skills to fix the problems they have created.  They may even have tried to convince you that you have had a great result.  For others, you may be coming to this site after one or more failed attempts to fixing lower eyelids gone wrong after your original surgical eyelid procedure.

The important message that Dr. Steinsapir wants you to come away with is that there is a definitive solution to fix botched lower eyelids.  The shape of the eye can be helped and in many cases, the result can exceed what you were hoping to accomplish with the original surgery. What is important is to avoid having measures that simply use up the resources that are needed to reconstruct your lower eyelid.  Generally, this is often well-meaning efforts by the original surgeon to fix the lower eyelid by putting a “stitch” in the eyelid. If it were that simple, then it is very likely that your surgeon would not have gotten into trouble in the first place.

It is essential to understand that the skin incision is not simply a “skin” incision.  The incision that is made below the eyelashes also called an infracillary incision, passes through the skin and also the muscle that is just behind this skin, called the orbicularis oculi muscle.  That muscle is under the skin and basically lines the lower eyelid to help hold the eyelid against the eye. The lower eyelid functions like a muscular hammock.  The infracillary incision cuts the motor nerves that supply the orbicularis oculi muscle along the edge of the eyelid.  That roll of muscle plays a very important function in maintaining the position of the lower eyelid against the eye.  It fights gravity.  When the muscle is damaged by surgery, the lower eyelid is no longer properly supported. After surgery, the eyelid will slump or actually come to rest away from the eye itself.  Scar tissue also forms in the lower eyelid and this contributes to post-operative changes in the lower eyelid that cause a loss of the almond shape of the eyelid. 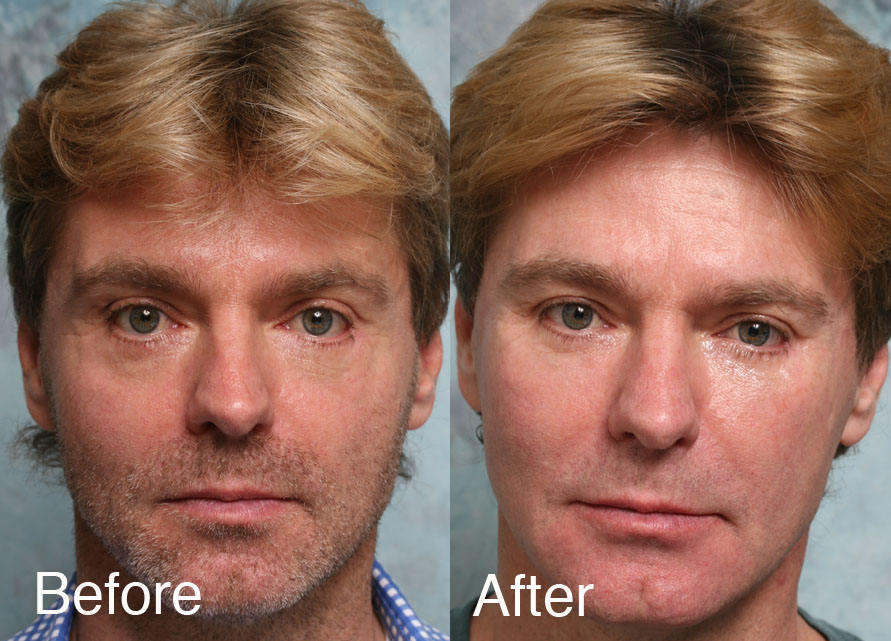 As the eye heals, the lower eyelid can be pulled off the lower surface.  While this is accurately called an ectropion, it is actually a far more complex process than a simple ectropion.  Surgery that fixes an ectropion is generally unsatisfactory for addressing these post-surgical eyelids. The use of skin grafts is especially problematic because aesthetically the grafted skin is disfiguring.  Generally, the most common methods offered for addressing these eyelids fail to address all of the factors that are at work in these botched lower eyelids.

One method that has been featured recently on medically oriented talk shows, involves releasing tissues behind the lower eyelid.  The appeal of this approach is that it is relatively simple and does not involve the harvesting and grafting materials to rebuild the lower eyelid.  Dr. Steinsapir believes this method is useful only in the most minimally compromised of lower eyelids.  Generally, these are eyelids that can be medically managed to avoid surgery altogether. More advanced methods involve the use of cadaveric skin in the lower eyelid.  This approach is only slightly more complicated than the graft-free approach.

Generally, the surgeon will place supporting stitches in the outer third of the eyelid for a week.  The cadaveric skin is called Alloderm.  The disadvantage of this material is that it simply will not persist for more than a few months.  It has a role in minimally damaged eyelids that don’t require a more permanent graft.  This surgery also does not address a weakness in the projection of the cheekbone.

Cosmetic orbital decompression surgery is sometimes offered as an alternative to addressing the relative lack of cheekbone projection.  This involves a significant surgery that removes bone behind the eye.  The theory being that by creating more room behind the eye, the eye will not project as far.  This will allow the botched lower eyelid to ride higher on the surface of the eye.  Indeed this does work.  The downside is that vision-threatening orbital decompression surgery is required.

Personal Consultations to Address Your Needs

For the past 25 years, Dr. Steinsapir has been performing surgery to fix unsatisfactory results after lower eyelid surgery.  Approximately half of these individuals have had more than one attempt at having the botched lower eyelids fixed before coming to see him.  For this reason, he has a very good idea of what works and what does not work.  While every situation is different, the one piece of advice Dr. Steinsapir has about these eyelids is that short cuts do not hold up for these eyelids.  If it were simple to avoid trouble, there would have never been an issue with the original surgery.  For this reason, Dr. Steinsapir does a very thorough assessment of individuals who come to consult with him.

He does not believe that this consultation can be performed via email, phone, or Skype.  There is simply no substitute for that detailed personal assessment which can take 1 to 2 hours.  The office does encourage you to call the office and send a photograph.  This is reviewed by Dr. Steinsapir.  If he believes you will benefit from the consultation, the office will share that information with you.  It is not a consultation but it will provide a confirmation that you are on the right track.

Aesthetics of the Lower Eyelids

His approach begins with a detailed plan for your individual situation based on that detailed personal consultation and examination.  In most cases, skin and soft tissue must be permanently recruited into the lower eyelid space to compensate for the loss of tissue that occurred with the original surgery.  It is not possible to fix the motor injury to the muscle that helps hold the lower eyelid against the lower eyelid.  For that reason, it is essential to remove as much tension from the lower eyelid margin as possible.  This is done by supporting the lower eyelid with a hand carved ePTFE rim implant.  There are other implants out there but Dr. Steinsapir does not believe that they are as good as the ePTFE implant, which is FDA approved for deep facial implantation.

An alternative to Fix Botched Eyelids

The common alternatives are the Flowers tear through the implant and a series of porous polyethylene implants designed by a variety of surgeons.  The challenge with these pre-made implants structural.  The porous polyethylene implants are hard implants and over time are subject to late infection because of the lack of good soft tissue coverage at this location.  The Flower’s implant is made of silicone and lacks the structural strength to serve as an anchor point for holding vertically lifted soft tissue into the eyelid.

Dr. Steinsapir has solved these limitations with the use of the ePFTE implant.  It is fixed to the orbital rim with titanium microscrews.  These can’t be felt because they sink into the ePFTE implant.  This implant is very strong and can be sewn to so it can support the cheek soft tissue when it is vertically lifted to provide more soft tissue and skin for these eyelids.  This allows the surgeon to vertically lift the cheek and provide the needed soft tissue and skin to the deficient lower eyelid.  Finally, the shape of the eyelid is controlled with the placement of a hard palate graft, which is sewn into the back of the eyelid.

In some cases, the infracillary incision is made too low and is highly visible.  In certain cases, it is possible to use these methods to revise the lower eyelid incision by raising it closer to the eyelashes.  If this is a concern for you, discuss this issue with Dr. Steinsapir at the time of your personal consultation.

Your eyelid surgery can serve as a key stepping stone along the path to become the best possible version of yourself, and you can take the first step by calling to schedule your personal consultation with Dr. Steinsapir today. Visit the homepage to see how cosmetic eyelid surgery can help you achieve your aesthetic goals.