She was extremely disappointed, as her surgeon skeletonized the upper eyelids, leaving them asymmetrical appearing and surgical. Her lower eyelids were not much better. The surgery pulled her lower eyelids down and emphasized the dark circles under the eyes.

In the ‘Before’ appearance after initial eyelid surgery with the other surgeon. Notice her eyelids are pulled down and hollow and the upper eyelids are skeletonized.

Here she is ‘After’ her first reconstructive midface procedure. Dr. Steinsapir placed a hand carved ePTFE implant along the orbital rim and lifted the midface. Notice the improvement in the lower eyelids.

After these unsatisfactory results, she consulted with Dr. Steinsapir to learn what could be done to help improve her appearance. She was told that several surgeries might be needed to achieve her goals. He first recommended and performed a midface lift with hand carved e-PTFE orbital rim implants to address the dark circles and lower eyelid position. Following this surgery, he performed fat transfer to the face to further soften the upper eyelids and the face.

Dr. Steinsapir was able to correct her unsatisfactory surgery, so that she could achieve the look she originally desired. 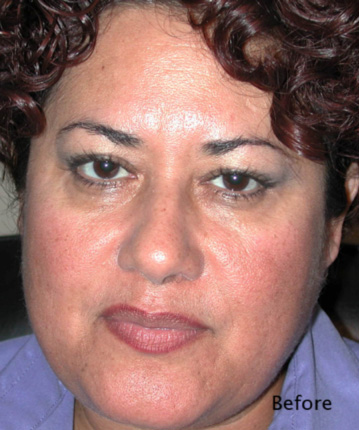